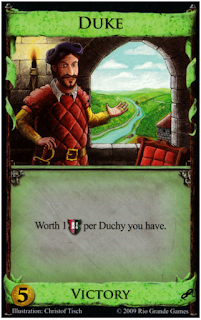 Duke is one of the most classic "alternate" victory point cards, dating all the way back to Intrigue. The complex of Duchy+Duke is also worth an enormous amount of points - potentially at least, the most possible on most of the boards upon which it appears, even more than the stack of Colonies. While there are occasionally some diverse applications for the card, the price point of $5 usually puts it out of range of rushes, and the sheer count of green cards you need for it to be effective usually disqualifies it from engines, meaning that by far its most common home is in a Slog style of deck. Let's dive in.


Duchy or Duke? Get the order right.

It doesn't take much math to figure out that, for a given number of 5-cost Victory cards, the number of points you have is maximized when Number of Duchies = Number of Dukes +3. This leads a lot of players early on to getting 3-4 Duchies and then alternating between Duchies and Dukes. This is almost always the wrong move. The reason for this is that you don't care about how many points you have right now, you care about how many points you are going to have when the game is over. And since Duchy is, on its own, a better card than Duke, you want to build up your Duchies first. If we assume we are against a Province-seeking opponent, we are looking to win the game by locking up more points than they can muster before they end it by piling out the provinces. 8 Provinces is 48 points, and to match that, we need 11 Duchy/Dukes - most optimally spaced at 7 Duchy + 4 Duke = 49 points. Thus, a rough rule of thumb is to get 7 Duchies before turning for Dukes. Not uncommonly, you'll actually go for all 8, since that is better still against an opponent that might snipe a Duchy from under you. Similarly, there are some cases where you flip for Duke a little sooner - for instance if the opponent can use Trash-for-Benefit cards to "Mill" Provinces out of the supply.

Also worth mentioning here is that, given that your opponent is playing for Provinces, you actually don't want to get Provinces of your own, even if you spike $8 for one. Just get the Duchy. It will probably be worth more points in the long run, but more importantly than that, it helps them reach their end-goal of ending the game on the Province pile much more than it advances your points lock.

There are a couple of main methods you have of trying to defeat a Duke slog.
Option one is to go over the top. A Duchy/Duke player is counting on their complex of those two cards to overpower anything else you might be doing by just being so hugely many points as to lock you out. If you can tap into a bigger wellspring, then this plan is suddenly going to look a lot less attractive to them - now they need to actually drain both piles as well as a third; you've taken inevitability away from them. Colonies are a big way to do this, nearly always invalidating the slog's plan. Jumping from $8 to $11, it turns out, is just not as big a deal as needing to go from 11 to 16 victory cards (all those extra junk cards really deteriorate the deck). While all the D/Ds would technically score more than all the Colonies, Colony player can take some Provinces or even just one duchy to flip that around. Another big way of going over the top is with VP Tokens. Golden decks score 4 points per turn in perpetuity, and with chewing provinces down a little, it can get there in a bit under 20 turns; Multi-Goons hands can easily score WAY more than any green card, and even single Goons or some Monuments, when combined with Provinces, can overcome the deficiencies of Provinces alone - though to be fair, those cards can work with Duke, too, if you can't build a deck to really capitalize on them by playing them more often. Finally, other Alt-VP cards are usually going to help a Province-seeking player against a Duke-seeking adversary. The reason for this is that the Duke player simply isn't going to have so much opportunity to buy them. If I am going for Duchy or Duke every time I hit 5, how often am I really going to be buying Gardens? While on the other hand, Gardens plus Province can, combined, go toe-to-toe with Duchies and Dukes - in short, more points just move the goal-posts, and that's not good for a player seeking to lock the opponent out on points.

The other main option is to be faster. This could mean a rush, but usually we're talking more about emptying the Provinces quickly, and the main way to do that is with a mega-turn strategy. All 8 Provinces at once is ideal, but over the course of 2-4 turns is still often going to be good enough, if you can do that reasonably quickly. Horn of Plenty is okay here, but you need very good draw for that, as you really need to empty ALL the provinces. Something like Bridges really hit the spot, though, letting you clamp down with a powerful air of finality.
"Normal" engines can get there, but they need to be pretty strong. The point here is that you need to get all the provinces, which means at some point you're going to be carrying 6 of those clunkers around in your deck. Typical engines are not built to be able to handle that. If you do want to go this route, you want to make sure you want to build "extra" before you start greening. If your engine is incredibly resilient (or if you're playing a super resilient Province-seeking Money deck, which is rare), you can even try to snipe some Duchies from your D&D opponent. It's very uncommon for this to come up, as it is going to be too much of a detriment for the engine almost always, but it does keep the D&D player "honest" - if they spend too long picking up money and neglect locking down their Duchies, you can start to give them problems.

A very large thing in the mirror match is winning the Duchy split. With more Duchies, you have more points already, each of your Dukes is worth more, and each of their Dukes is worth less. It's just absolutely vital. A 5-3 Duchy split means that even if Dukes go 3-5 the other way, you'll still have a 6 point lead. 6-2 and forget about it - even 1-7 on Dukes wouldn't make up the deficit. So in short, it's pretty important to not lose the split.

Having said that, you also need a plan for after the Duchies go. Sometimes, that's barreling into Dukes headlong ASAP. But usually it's a little bit more subtle. The thing is, in order to not lose the split, you probably greened pretty early, which means that when the last Duchy comes off the table, your deck is probably pretty terrible. Furthermore, being able to spike a province, or even a few provinces, is a big swing when the split was close. And if there isn't a third pile being depleted, there will almost surely be time for some provinces. Dragging out 8 estates is just really miserable (though occasionally correct). So unless there is a spammable or dropped third pile, usually the next thing to do after Duchies go is to spend a little time building - being opportunistic on price points, of course, as you generally should be when you're in the Money Density regime.

As is generally true of slogs, we're in the money density regime, which means that treasures are just good cards. We want to hit $5 a lot here, and because we need to worry about the split, we tend to green pretty fast, which means our Money Density is pretty consistently staying below $1/card. Silvers help to bolster that a lot, and of course Golds do tremendously, though usually you aren't going to have time for lots of golds (Hoard  and Soothsayer do say hello, though). And since the deck is so bad and constantly adding green cards, Copper tends to be good, too. However, I have said this quite a bit in the past, and people tend to make too much of it. Copper tends to be a good card in these decks, but it isn't great. Against discard attacks, you usually don't want it. If you are in the mode where you're going to be looking to spike Provinces, hold off. Woodcutter variants tend to be pretty good because they let you get these coppers, but that isn't the hugest deal. Horse Traders is better, since you often have green to discard, and usually your best two cards will get you the 2 you need to make 5. Feast can help, especially if you need a third pile, though it's not stellar. Any silver-gainers tend to be quite good. Duchess, as you might expect, helps as well. Trashing attacks tend to wreck you pretty hard - trashing just one Duchy does huge damage.

http://gokosalvager.com/static/logprettifier.html?http://dominion-game-logs.s3.amazonaws.com/game_logs/20151211/log.0.1449869627044.txt
In this game, we've got a pretty classic match-up of slog vs engine. I have Count and Nomad Camp as enablers, he has Forager to trash down and indeed to try to contest Duchies, being able to trash them later. If he's able to do enough of this, then I will have to get a third pile empty beyond D&D, which is going to take me quite a while (either Nomad Camp or more likely Estate are the prime choices here). Indeed, he's able to get 3, which is kind of the key number here. The problem is, once he trashes all of those out, I can still overcome all the provinces with only 12 D&D - which means he needs to keep some around, but his deck can't afford that fast enough. In the end, he's probably better served by hauling towards all the provinces faster - indeed, even as was, he ends the game with 7 - though in balance, Count is a better enabler when it can straight-up gain Duchy.

http://gokosalvager.com/static/logprettifier.html?http://dominion-game-logs.s3.amazonaws.com/game_logs/20151210/log.0.1449761347012.txt
Here, I focus on treasures to slog. Mandarin is a pretty nice enabler, providing a good chunk of money and control over your draw to try to hit 5-5-5-5 more often. My opponent largely follows suit, but picks up some Nobles, an Expand, and even (most egregiously) a Vagrant over a Silver. Nobles is a fine card to have, but you have to look at your alternatives - it could have been a Gold (and at some points, Duchies). Expand is also a fine card, but not great - your deck is largely full of coppers, silvers, D&D, none of which are really great Expand targets. So it's great if you can get it with your estates, but you're not hugely likely to do that reliably enough. And Vagrant is good, but even drawing 2 cards EVERY time wouldn't be much if any better than a silver, and of course the Vagrant will still miss often.

http://gokosalvager.com/static/logprettifier.html?http://dominion-game-logs.s3.amazonaws.com/game_logs/20151209/log.0.1449697325049.txt
In this game, my opponent is able to get out to a lead in Silvers, which improves his longevity. I have to dive Duchy pretty fast to not lose the split, but where that leaves us is with his deck being quite a bit better than mine for the next phase. Crucially, as discussed above, he is able to get a couple Provinces, and this makes it so that me winning the Dukes doesn't really matter. Bureaucrat is a quite good card in these slogs, but it's not so huge to be able to overcoming such a big deficit. (No, I'm not sure how I could have played better, but probably I could have - the second BCrat is probably a mistake? And maybe I can look at building more, even risking losing the split??)
Posted by WanderingWinder at 10:10